Written by Kevin P on 01 June 2022. Posted in Uncategorised

Held May 25-27 at Pony Too, Scores and Pony Bama in Huntsville, the industry’s top feature entertainers competed for cash and industry titles! 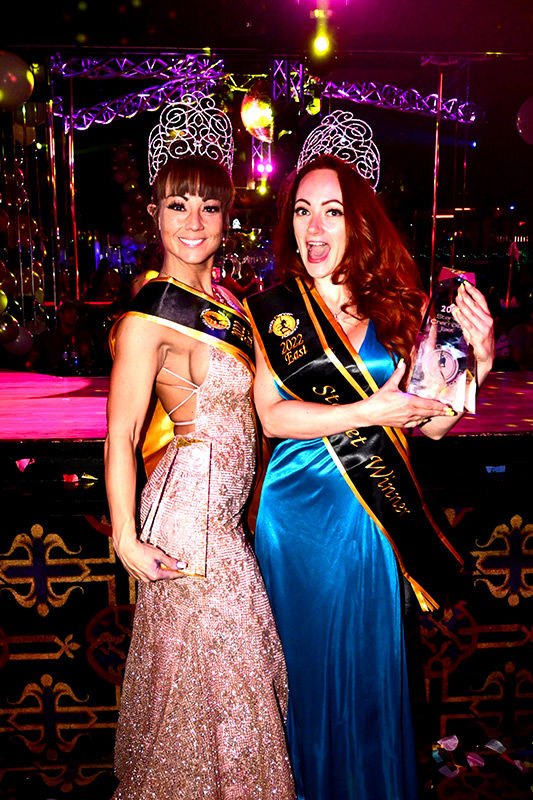 In its triumphant return after a three-year COVID-related hiatus, the Annual Exotic Dancer Invitational — the EDI — was held this past May 25-27 at Jerry Westlund’s Pony Clubs (Pony Too, Scores, Pony Bama) in Huntsville. The EDI remains the most elite showgirl dance competition in the world, and is held twice each year (East & West) as Showgirls (girls with more than four years of feature touring experience) and Starlets (girls with fewer than four years of experience) present competition-level shows over the course of three nights.

In the Showgirl Division, several acts were neck-and-neck as the scores were tallied, but only three performers — Ms. Parker, Katie Sutra and Angel Beau — would move on to the finals. Though the scores were ultimately very close, it was Ms. Parker who would take home the title of EDI East Showgirl Champion with her out-of-this-world “Astronaut” show (fitting for “Rocket City”), a show that bested First Runner-Up Katie Sutra’s “Charlie Chaplin” set and a routine by Second Runner-Up Angel Beau that would earn her the “Most Extreme Show” mini-title.

“I am so honored to have won EDI East Showgirl Division,” says Ms. Parker. “When I first started featuring I had set a few goals for myself. So far I have been knocking them out left and right. My first EDI was in 2018 and I ended up winning EDI West Newcomer Division ‘18. This has been my third EDI and second time competing in the Showgirl Division. I am so proud of everything I have been able to accomplish these last four years. I am also excited to see what the future will bring!”
As the EDI East 2022 Champion and First Runner-Up, Ms. Parker and Katie Sutra will join EDI West 2022 Champion and First Runner-Up SharZayn and Michelle Lynn in Las Vegas as these four entertainers compete for the EDI 2022 Overall Champion title. The four entertainers are slated to compete on Sunday, August 14, at Deja Vu Showgirls in Las Vegas, at the EDI 2022 Final. The top two scoring entertainers will move on to perform during the ED’s Awards Show on Tuesday, August 16, at the Criss Angel Theater at Planet Hollywood, where the EDI 2022 Overall Champion will be announced.

In the Starlet Division, several brand new faces graced the stage on May 25 at Pony Too, but only three entertainers — Ella Hotwheels, Delilah Deluxxx and Bailey Fox — would move on to the finals. With a roller-skating show that rocked the crowd, it was Ella Hotwheels who would take home the title of EDI East Starlet Champion. Ella bested First Runner-Up Delilah Deluxxx’s “Cleopatra” set and a routine by Second Runner-Up Bailey Fox that would earn her the “Audience Favorite” mini-title.

As the winners of the EDI East and West Starlet Division, Ella Hotwheels and Hayla Faye will perform live at the EXPO’s Opening Night Party on Monday, August 15, at the Hustler Club Vegas.

“It was an honor to compete at the EDI East,” says Ella Hotwheels, who competed in her very first EDI in 2022. “Jerry’s high energy clubs pulled out all the stops hosting us. I loved skating on those stages and I’m so proud to be the EDI East Starlet Champion! My motto: Do what you love and people will love you for it!”

Several other entertainers competed at the 2022 EDI East, including: In the Showgirl Division, the duo of Fire & Ice (Janine Jericho and Hayla Faye), Blake Monroe, DinahMight, and Lori Lane; in the Starlet Division, Lana Mae, Raychel Revolver, Alysia Clarke, and Venom Rose.

The 2022 EDI East was co-produced by Lexi Lamour and assisted by Kevin Pennington, with stage production by Rob Aiken and assistance by Justin of Pony Too. The Official 2022 EDI East Apparel was sponsored by GentClubShirts.com.

The success of the EDI contests has as much to do with the host club, its owners and staff, and The Pony Clubs are certainly no exception. Owner Jerry Westlund, along with assistance from Stephanie Wilbanks, Garret Hamilton, GMs Zak Phillips, Jason Gee and Dane Hansen, and our “voice” of the EDI East Jeb Jarrell, provided an amazing experience for the 2022 EDI East.
“It’s always a party when Jerry Westlund is involved, but we also know that everything will run smoothly and that all of our competing entertainers will have an amazing experience,” says ED Publisher Dave Manack, who is also the EDI founder and co-producer. “It was great to see some amazing performances at this year’s EDI East, and we’re excited to see what a new generation of feature entertainers can bring to the industry.”

The following  Mini Titles  were presented at the 2022 EDI East: