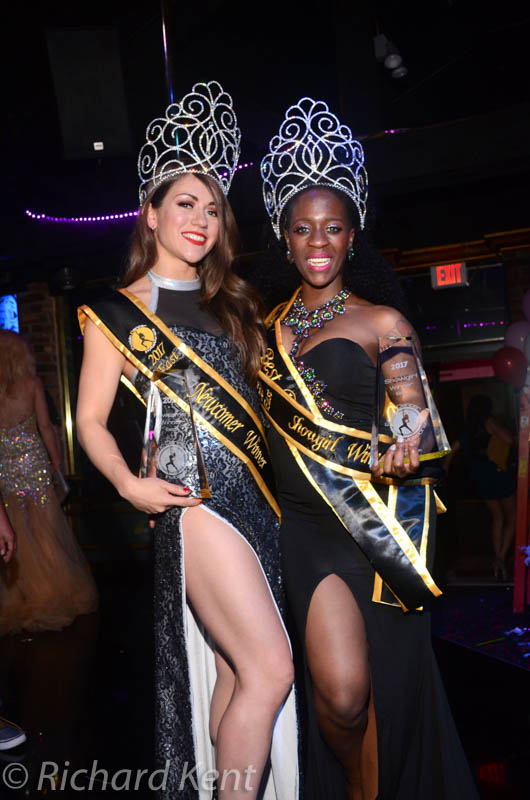 In a competition that was a fierce as any in the event’s history, Aria Moon bested a talented group in the Showgirl Division with her “Marionette” show to win the crown, the cash and the title, as well as an automatic nomination for ED’s Overall Entertainer of the Year Award. The EDI East First Runner-Up Angela Sommers graced the stage with her beauty and seamless performance, while Second Runner-Up Natasha Nova offered two ambitious and alluring shows for Friday’s Semi-Finals and Saturday’s Finals.

“The scores have never been closer and the performances have rarely been better,” says EDI Founder and Producer Dave Manack, also the Associate Publisher for ED Publications. “We’re so proud to have a group of entertainers like this represent the EDI contest and the ‘showgirl’ industry at large. We also must point out the incredible hospitality shown by Pony Club owner Jerry Westlund and his entire staff at the club. Jerry has supported ‘showgirl’ feature entertainment for decades, so having the EDI at his club made all the sense in the world.”

“The performance level and the amount of creativity that went into these shows was amazing—as good or better than I've ever seen," says Pony Club chain owner Jerry Westlund. "There are clubs out there that don’t take advantage of this type of entertainment and that don’t book features as showcases, even for their own entertainers, and that's a big mistake as far as I’m concerned. I was thoroughly impressed with what I saw. The shows, the costumes and the performances were phenomenal. I booked many of the performers that I’ve seen. It was a great show!"


"There are three competitions that have helped to make me the performer I am today; they are Stripperfest/Stripperpalooza, Nudes-a-Poppin and of course, the Exotic Dancer Invitationals. The EDIs and Exotic Dancer Publications are paragons of integrity in this industry. I'm beyond proud and honored to have been a part of it these past few years!" - Showgirl Division Winner, Aria Moon


"I'm still somewhat in disbelief that I won the EDI's Newcomer Division! I am honored and thrilled to have this title and I look forward to seeing everyone at the EXPO in Las Vegas!" - Newcomer Division Winner, Victoria Drive


There are two EDI competitions each year—East and West—and the EDI West is slated for Platinum 84 in Denver, June 22-24. For more information on the EDI contests, please visit www.theEDIs.com, email This email address is being protected from spambots. You need JavaScript enabled to view it. or call (727) 726-3592. Click here to see all the photos from the 2017 EDI East