Written by Kevin P on 08 May 2019. Posted in Uncategorised 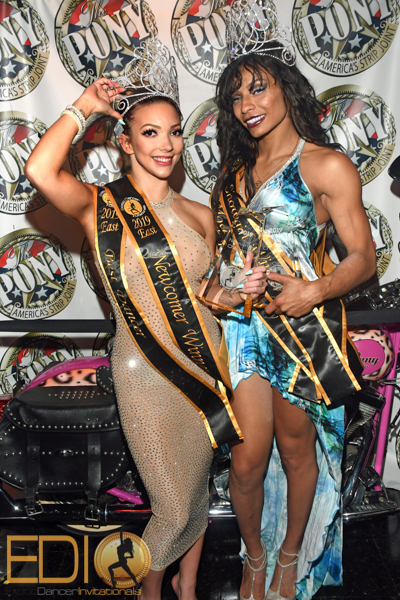 In what was easily one of the most competitive EDI (Exotic Dancer Invitational) contests since its inception in 2014, this year’s EDI East at the Pony Club in Memphis (June 5-7) showcased a finals night that will surely go down as one of the EDI’s most memorable. When the smoke finally cleared, the stunningly acrobatic Shar Zayn edged out 2018 ED’s Entertainer of the Year Natasha Nova and Janine Jericho to win the EDI East’s Showgirl Division and garnered an automatic nomination for this year’s ED’s Entertainer of the Year Award. In the equally competitive Newcomer Division, a fiery show from Canadian beauty Heather Heaven bested Bailey Fox and Stacia Dianna to take top honors and an automatic nomination for ED’s Newcomer of the Year Award.

“Winning the Showgirl Division was one of my goals for this year; I only asked God to give me the opportunity to show everyone what I can do,” says Shar Zayn. “Since I won (the EDI East) Newcomer Division in 2018, I worked very hard to be able to achieve this goal. I feel very honored to have competed with the best in the United States and internationally. I loved the experience! Being nominated for ED’s Entertainer of the Year is a great honor, especially to have achieved this great nomination in such a short period of time. I have no words to describe the emotions I’m feeling!”

“I watched the audience’s and judges reactions throughout Finals night, and I saw gasps and cheers and standing ovations,” says EDI Producer and ED Publications Associate Publisher, Dave Manack. “Each of our Showgirl Division competitors brought amazing shows and unbelievable energy to the stage, and everyone in the club seemed to feel it. In the end, Shar Zayn’s jaw-dropping acrobatics and powerful stage presence was enough to top Natasha Nova (First Runner-Up) and Janine Jericho (Second Runner-Up), both of whom are incredible performers.”

This was the second time and EDI East competition was held at a Jerry-Westlund-owned club; the first was the EDI East in 2017 at the Pony Club in Indianapolis. Westlund is a long-time supporter of “showgirl” feature entertainers, and has booked them steadily in his clubs for two decades.

“We thoroughly enjoy partnering with Jerry on our EDI contests,” says Manack. “His staff and entertainers appreciate showgirl feature entertainment, and the Pony Club Memphis was no exception. General manager Stephanie Wilbanks, Heaven the house mom and the rest of the staff were incredibly helpful and played instrumental roles in having a great three-day EDI event.”

Of course, Westlund is ever the showman, and to add a bit of flair to the EDI he brought in “political celebrity” Roger Stone, best-selling author and political strategist who’s worked for every Republican presidential campaign (including Donald Trump), dating back to Richard Nixon. Stone was accompanied by Kristin Davis, known as the “Manhattan Madam,” a former madam who was famous for running a high-end prostitution ring in New York City. ED Publisher Don Waitt was in attendance, as was RCI Hospitality’s (Rick’s Cabaret) Chairman, President and CEO, Eric Langan.

“What a beautiful whirlwind of a weekend!” says Heather Heaven, winner of the Newcomer Division. “To compete internationally for the first time and take home top honors in my division, I am elated! I felt so grateful for the opportunity to perform at the gorgeous Pony Club Memphis, thank you Jerry Westlund! The stage crew were so on point, helpful and patient. And thank you to Dave Manack and (EDI co-producer) Lexi Lamour for making this all possible for us showgirls!”

Find many more EDI West photos at ExoticDancer.com and theEDIs.com!