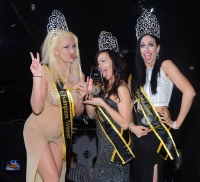 At the end of the three-evening event, three girls reigned above the rest. Liza Mae Lust outlasted the competition to take the Newcomer Division title, Natasha Nova beat out an incredibly competitive Showgirl Division to capture that title, while Lacey Rain gained an automatic ED’s “Overall Entertainer of the Year” nomination with an impressive victory in the prestigious Champion Division. All three entertainers received crowns, trophies and cash prizes.

“The shows at the EDI contests keep getting better and better, and the competition gets even stiffer each year,” says EDI Producer & Founder, Dave Manack. Manack is also the Associate Publisher of ED Publications. “Lacey Rain’s set was more like live theater than it was a feature entertainer show; it was both unique and highly ambitious. All of the girls brought something to the contest that made it our best EDI yet, and we sincerely appreciate the time and effort they put into their competition performances.”

“Scores Presents Platinum 84 could not possibly have been a better host club,” says Manack. “They even provided special guest Ron Jeremy, who garnered a great deal of attention from male and female customers alike! The club rolled out the red carpet for the EDI West, and we certainly appreciated their hospitality.”

For further coverage of the 2016 EDI West, as well as previous EDI contests, visit www.theEDIs.com. The 2016 EDI East will be held at Monroe's of Palm Beach, West Palm Beach, FL, June 2-4.