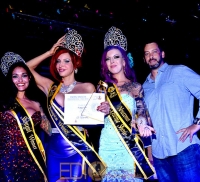 "It was such an honor to be selected to perform at the EDI East Competition this year.  All of the performers were so great, and it was a privilege just to share a stage with them,” says Rubberdoll. “When I was announced as the winner, I was blown away.  It made me feel wonderful to know that the judge's liked the show and that all the hard work had paid off.  And it was extra special to have it all happen at Monroe's, which is such a classy club that I always enjoy visiting.  It's going to be amazing to perform at the ED Awards again, and I can't wait to see everyone at the EXPO."

"Once again, the industry's 'showgirl' feature entertainers brought their energy, their enthusiasm—and their skill—in spades, at the EDI East," says EDI Producer and Founder, Dave Manack. "Each night had something special to offer—the up-and-coming Newcomer Division, the entertaining Showgirl Division, and the elite Champion Division. We also had a fantastic host club with Monroe's of Palm Beach, including owners Scott and Jennifer Lizza, GM Joe Bee and the entire staff of that amazing venue in West Palm Beach.”

For further coverage of the 2016 EDI West, as well as previous EDI contests, visit www.theEDIs.com