Justice reigns at the EDI West in Los Angeles! 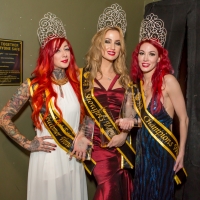 March 20th, Clearwater, FL: They came to Los Angeles from across the U.S. and Canada to compete in the nation’s top, invitation-only showgirl competition. Hosted for the second straight year by Dames n’ Games, a Spearmint Rhino club, the Annual EXOTIC DANCER Invitational (EDI) West was held March 9-11 and showcased 13 competitors in three divisions—Newcomer, Showgirl and Champion. At the end of the event, three competitors rose to the top: Angel Beau was crowned Newcomer Division Winner, Angela Sommers was honored with the Showgirl Division title, while Canadian sensation Justice won a hotly contested Champion Division that featured one amazing performance after another.

"I didn't think I was going to win—I'm the Canadian underdog—but when they called my name as the winner, I thought, 'this isn't real!'" says Justice. "I feel really honored and blessed. The U.S. girls, and the industry here, have welcomed me with open arms. I love representing my country, showing what we can do!"

Angel Beau shocked the crowd during Monday evening’s Newcomer Division competition, as she enhanced her dancing skills by walking on machetes—you read that correctly, machetes—and pushing a nail into her nose, a performance which also garnered her the “Most Extreme Show” mini title. During Tuesday evening’s Showgirl Division competition, the beautiful Angela Sommers seduced the crowd and the judges with her mesmerizing and graceful “mermaid” show. Phoenix Phires (Showgirl Division’s First Runner-Up) “rose from the ashes” in her grand “phoenix” costume, while the playful “devil” Janine Jericho (Second Runner-Up) stunned the crowd with her aerial hoop routine. Jaded Dawn, brightened up the night in an LED belly dancer with her slithering accessory—a giant boa constrictor. Finally, a fully sequined “Michael Jackson” took the stage in the form of Canada’s Madison Q, who busted moves that got the crowd dancing in their seats.

"It was an extreme pleasure to welcome ED Publications and the amazing contestants from around the country to compete at our Dames N' Games, Los Angeles location," says Kathy Vercher, President and COO Spearmint Rhino Companies. "They all did an amazing job and showed great skill, worthy of being displayed in a competition style setting."
"The showgirls are always amazing to watch and exude nothing but sheer talent," echoes Ariel Goode, Marketing Manager Spearmint Rhino Companies

Current Entertainer of the Year Lacey Rain made a grand entrance and jaws dropped when she hit the stage in an amazing Marie Antoinette/King Louie, dual-faced costume, then proceeded to rock the house with her acrobatic and athletic stage performance. The show helped Lacey earn the “Best Overall Show” and “Best Costume” mini titles. Tali De’Mar’s burlesque-styled performance, classy and elegant, was straight out of the 1920s swing era, and ended in a sexy martini glass bubble bath. For the second straight year, Tali’s talents gained her the EDI West’s “Best Dancer” mini title. Finally, the “Predator” invaded Dames n’ Games in the form of Simone Danalustrous, who procured an authentic costume from the movie of the same name, and proceeded to attack the crowd and capped her show off in a shower of green “Predator” blood, earning her the “Audience Favorite” mini title.

But it was Justice’s show that won over the judges. The Canadian came out as a “space babe” who crashed her UFO on a hostile planet, and performed a flawless aerial hoop routine and finished in the Milky Way’s star-dusted bath. As the winner of the EDI West, Justice secured an automatic nomination for the ED’s 2015 Entertainer of the Year Award and will perform on stage at the Annual ED’s Awards Show in New Orleans on August 25th during the Annual EXPO. Tali De’Mar was the Champion Division’s First Runner-Up, while Lacey Rain was Second Runner-Up.

"It was thrilling to see all of these great competitors all in one place, especially with the elite level of talent showcased in the Champion Division," says EDI Founder and Producer, Dave Manack. Manack is also the Associate Publisher of ED Publications, which produces the Annual Gentlemen's Club EXPO and ED's Awards Show. "In just its second year, the EDI has become the most prestigious, national feature dance contest, and we are proud to be the producers of this contest series. And the shows these girls put together are absolutely amazing! They continue to raise the bar for feature entertainers across the country."

Other talented EDI West competitors included the Newcomer Division’s Reagan Reilly and Jedda Antonio. For more information on the EDI contests, including the upcoming EDI East at Fantasies Nightclub in Baltimore, May 28-30, please visit www.theEDIs.com or call (727) 726-3592.